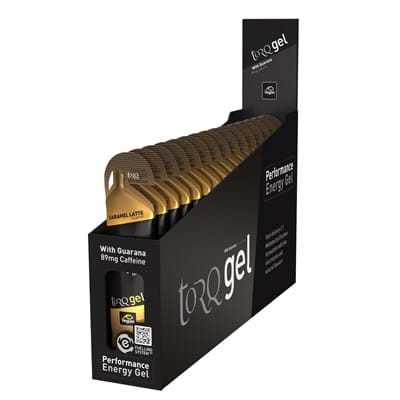 Ever the innovators, TORQ's Caramel Latte (with Guarana) Gel is revolutionary in every sense of the word.
Not only have TORQ produced a long-awaited variation of their caffeinated gel incorporating natural Guarana to deliver 89mg of caffeine per serving, but this gel is actually crafted with real coffee!

TORQ roast premium decaffeinated Columbian coffee beans just a few days before production and then make an exceptionally large cafetiere of coffee, which is then used to flavour the gel, along with some natural caramel flavouring.

Produced with 30g of fast-delivery 2:1 Maltodextrin: Fructose carbohydrate, with the 5 key electrolytes lost during exercise, with natural flavours. TORQ’s Energy gels have a silky-smooth consistency and are light on the stomach, for the fastest possible absorption. At 30g of carbohydrate per 41g serve, TORQ’s compactly packaged Energy gels really pack a punch and represent tremendous value compared to most other gels on the market.

Caffeine consumption during exercise also helps in lubricating the central nervous system, to increase muscular power and efficiency as well as mobilising fat as a fuel source, helping to spare glycogen (your carbohydrate reserves).

TORQ’s Gels form part of the TORQ Fuelling System, so can be used alongside TORQ’s energy drinks, bars and chews to fuel optimal performances. Suitable for vegans and containing no artificial sweeteners or colours.