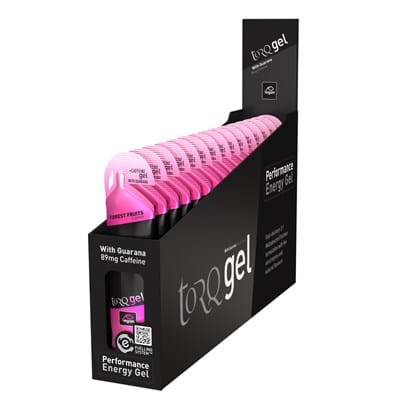 Produced with 30g of fast-delivery 2:1 Maltodextrin: Fructose carbohydrate, with the 5 key electrolytes lost during exercise, with natural flavours.
TORQ’s Energy gels have a silky-smooth consistency and are light on the stomach, for the fastest possible absorption.

At 30g of carbohydrate per 41g serve, TORQ’s compactly packaged Energy gels really pack a punch and represent tremendous value compared to most other gels on the market.
Caffeine consumption during exercise also helps in lubricating the central nervous system, to increase muscular power and efficiency as well as mobilising fat as a fuel source, helping to spare glycogen (your carbohydrate reserves).

TORQ’s Gels form part of the TORQ Fuelling System, so can be used alongside TORQ’s energy drinks, bars and chews to fuel optimal performances
Suitable for vegans and containing no artificial sweeteners or colours.

Unlike other gels, this one is light in texture, which makes it easy to consume. It's also refreshing - surprising, considering how sweet it is.

TORQ started as fitness consultants and coaches their energy products were developed to plug gaps they saw. Well researched, cutting edge performance from ethically/locally sourced ingredients is a big plus too.