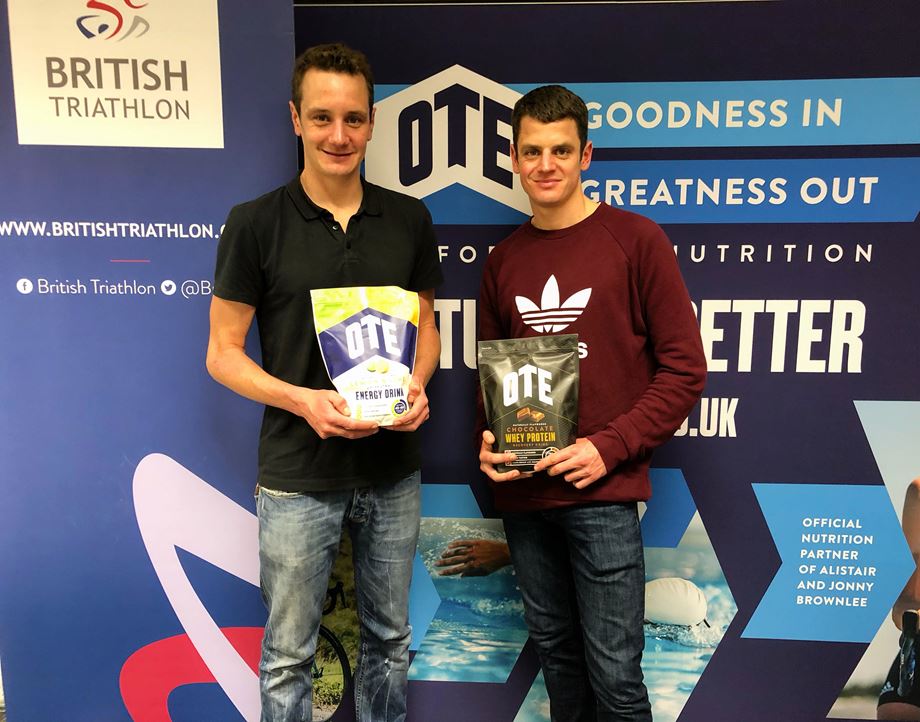 OTE and British Triathlon will work hand-in-hand to enhance the British Team’s training and performance in the run-up to the Tokyo 2020 Olympic and Paralympic Games, as well as offering British Triathlon Home Nation members exclusive discounts on OTE’s range of naturally flavoured energy, hydration and recovery products.

British Triathlon Home Nation Members will further benefit from OTE’s nutrition advice and product recommendations, plus will be able to purchase an Official British Triathlon drinks bottle from January 2019 featuring a bespoke design to celebrate the partnership.

OTE design and develop award winning sports nutrition and healthy snacking products using natural ingredients. Particular attention is paid to making them great tasting, kind on the stomach and easy to use. Put simply, Goodness In = Greatness Out. They pride themselves on demystifying the area of sport nutrition to assist every level of athlete. By offering straight-forward, scientifically backed nutrition advice, OTE hope to encourage educated choices by all to improve performance or general fitness.

OTE are already the official nutrition partner of Alistair and Jonny Brownlee, Georgia Taylor-Brown. With the addition of the National Governing Body to their triathlon portfolio, OTE look forward to broadening their contribution to all members of the triathlon community from those working towards their first GO TRI event to the GBR athletes crossing the 2020 Tokyo finish line.

Mike Cavendish, British TriathlonPerformance Director, said: “The partnership with OTE will greatly strengthen our comprehensive approach to winning medals in Tokyo. Nutrition is a key factor in our athletes’ ability to optimise their training as the Games draw closer. We feel confident that in collaboration with OTE we are fuelling our athletes to perform at the highest level both in day to day training and on race-day when performance matters most”.

Matt Harrison, Managing Director at OTE Sports said: “We’re extremely proud to reveal this exciting partnership with British Triathlon and are looking forward to supporting both athletes and members the with OTE’s natural sports nutrition products so they can compete at their best.”

Find out more about OTE Sports at www.otesports.co.uk

British Triathlon is the Governing Body for the sport in Great Britain. It is responsible for raising the profile and delivering elite performance for Triathlon, Paratriathlon, Duathlon and Aquathlon in Great Britain. Triathlon is a fast growing, dynamic and modern Olympic and Paralympic sport with talented world class athletes, coaches and support staff, focused around delivering world-class success and inspiring participation.

We also have a strong squad of highly world ranked elite triathletes, and emerging talent from our youth development programmes https://www.britishtriathlon.org/media/statistics.

There are over 1,200 triathlon events conducted in Great Britain each year, a figure which grew by 63% between 2012 and 2016. British Triathlon is committed to being a leader in environmental awareness in sport, protecting the environment in which we operate today and in the future.

British Triathlon is a beneficiary of the UK Sport Lottery funded World-Class Programmes (WCP). The programmes focus on performance sport with the aim of achieving sporting excellence on the world stage. Further information can be found on the UK Sport website at www.uksport.gov.uk.